Being such a large city, it’s not surprising that there are a lot of beautiful places to visit in London. However, if you are a traveller that wants to explore the city beyond the well-known tourist locations that are pictured everywhere on social media, here is a list that will interest you, filled with free places to go to in London that are off the beaten path, as well as Instagram-worthy locations to make everyone think you’re turning into a local. 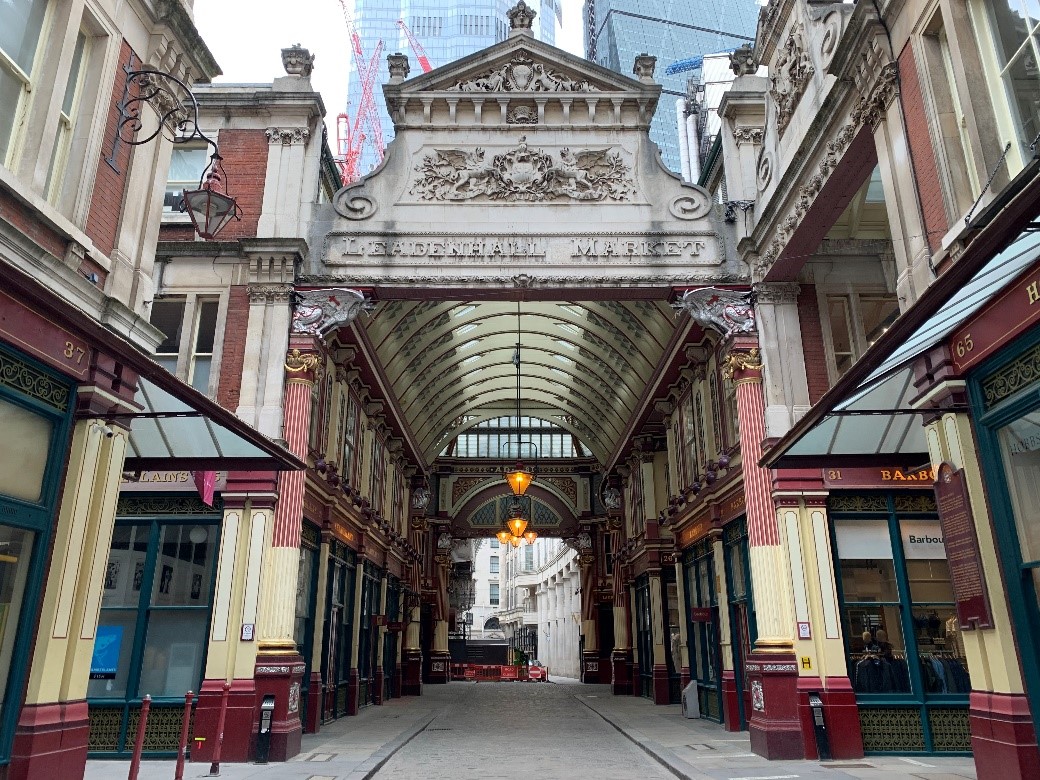 At the top of our list of beautiful places to visit is a location full of hustle and bustle. Ever since the 13th century, this market has been a hotspot for buying and selling all sorts of goods.  Three years before the fire, Samuel Pepys noted in his diary that he bought a “good leg of beef for a sixpence” here.

The Great Fire of London destroyed some parts of the market and, when it was rebuilt, it became a covered structure for the first time.  It’s been featured in many films — Harry Potter fans will recognise it as Diagon Alley.

During the 18th & 19th centuries, it was a common sight to see foxes sold from bags. Back then, fox hunting was still a popular sport. To ensure a fox would be found and the hunters wouldn’t have to work too hard, one was often bought and released just before the event. Thankfully, fox hunting was banned in England in 2005.

In a more uplifting and compassionate turn of events, one notable resident of this market was a male goose who escaped slaughter and was fed by the local merchants. His name was Old Tom, he lived to 38 years old and was even buried here. 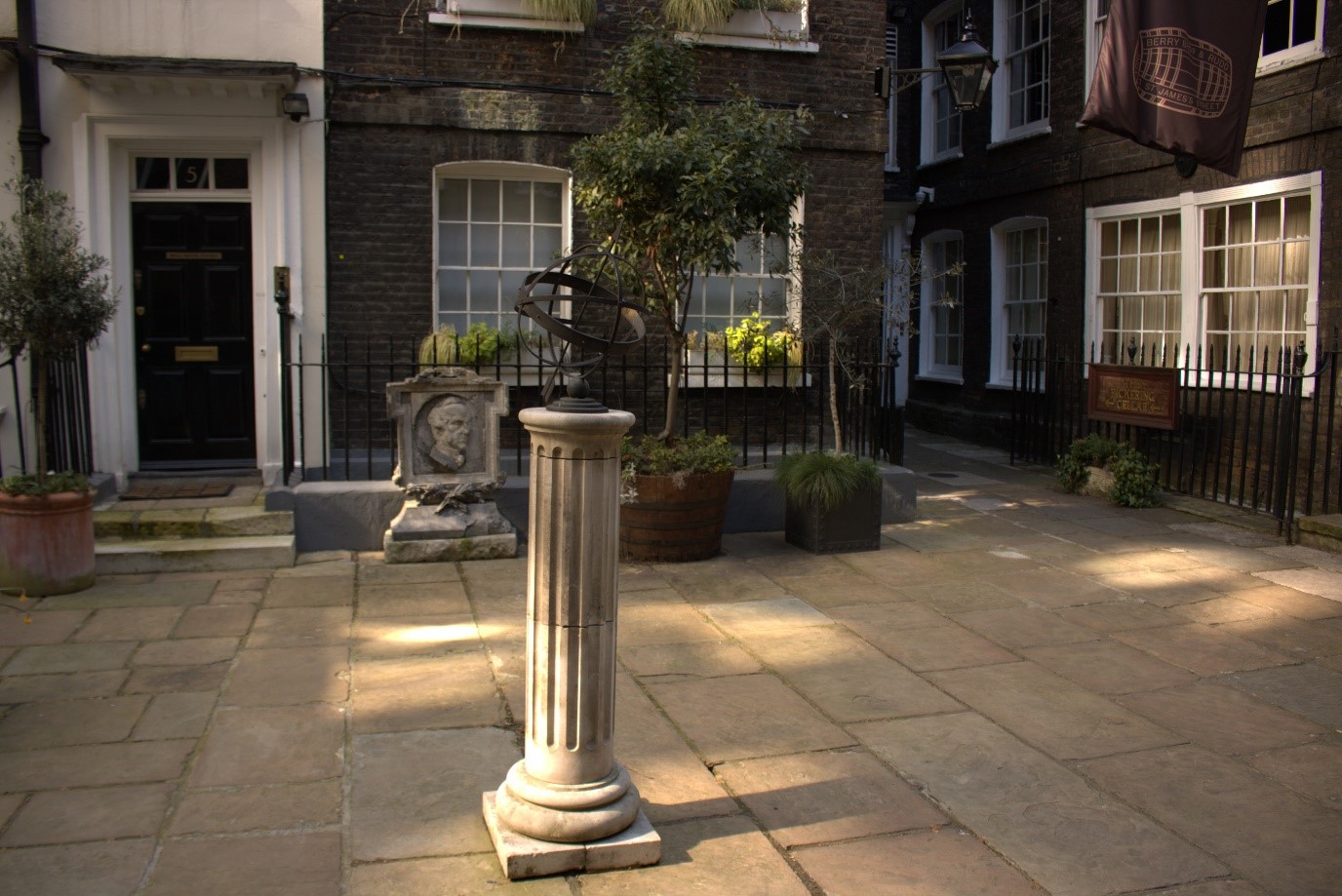 Here is one of the best quiet places in London. As soon as you walk into this courtyard, the original gaslights and quiet seclusion take you back to an earlier time, one filled with a shady reputation.

In the 18th century, the seclusion made this little square, known as the smallest square in London, notorious for gambling dens, bear baiting, and duels. It's said the last duel in London occurred here. Rumour has it that even Beau Brummel, a close friend of the crown, King George IV, the famous inventor of the cravat, once fought here.

The square was named after William Pickering, a coffee merchant who once owned several of the buildings here and whose grandfather opened Berry Bros, the city's oldest wine merchants.

It was also once home to the Texas Republic's embassy (see plaque on the right as you enter the passageway), back when Texas was an independent country. Rumour says once Texas joined the US, they left London and a bill for renting the premises behind. Over a hundred years later, a group of Texans travelled to London to pay the bill. 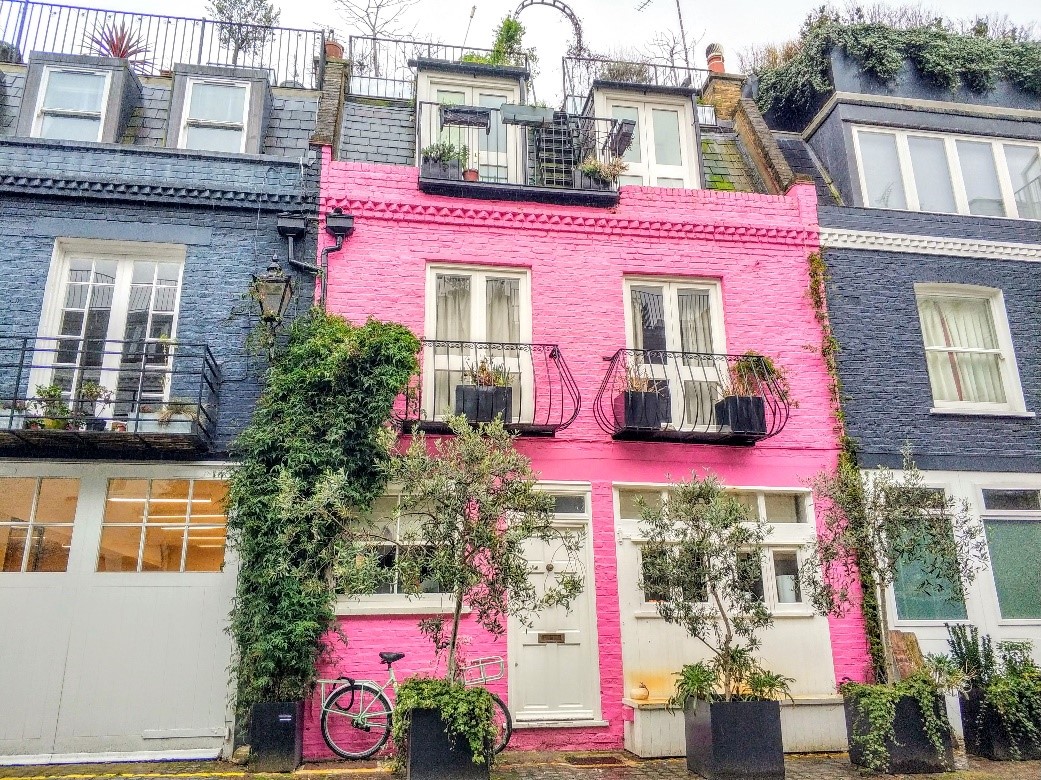 The Mews are picturesque cobblestone streets away from the hustle and bustle, part of the few quiet places in London. They are reminiscent of a time when horses were an important part of life.

The mews houses were aligned stables and carriage houses with living quarters above, built behind their large city houses by wealthy families during the 18th and 19th centuries. With the passage of time, they fell into disuse and were usually sold for ridiculously low prices. However, they got trendy again during the 1960’s, when celebrities and high-qualified professionals turned them into modern houses.

St Lukes Mews, in addition to being known as one of London's most charming streets, was the film location of a famous Richard Curtis romantic comedy, Notting Hill.

Number 27 is the home of newlyweds Juliet (Keira Knightley) and Peter in the film Love Actually. This is where Mark (Andrew Lincoln), Juliet's husband's best friend, declares his love to Juliet using some signs where, among other things, he's written 'To me, you're perfect.' 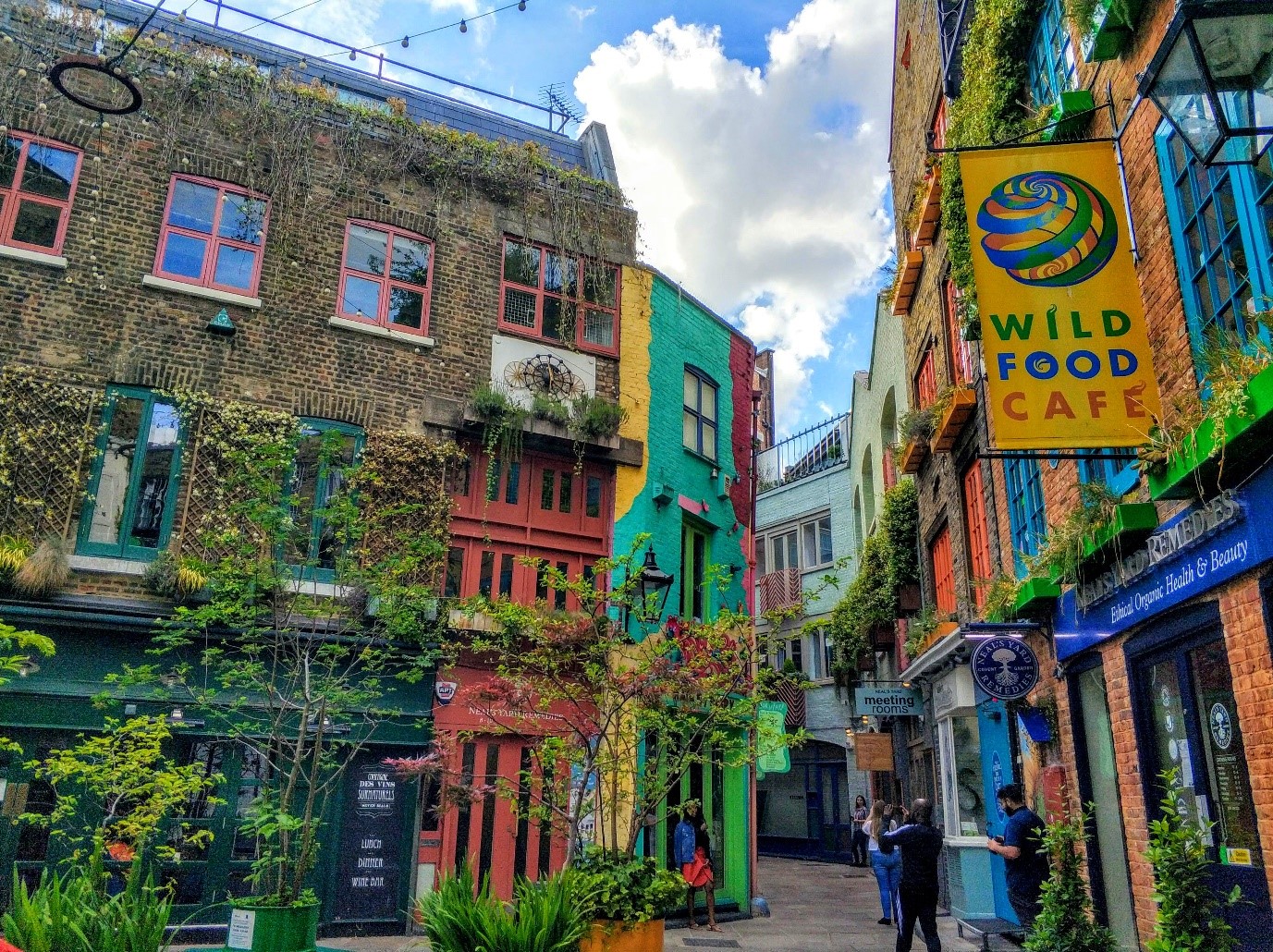 Neal's Yard is one of the most beautiful places to visit, and an Instagrammers’ paradise! This hidden and colourful inner courtyard is surrounded by old warehouses from when Covent Garden market used to sell fruits and flowers.

The LGBT community has always had very colourful symbols, but have you heard about the Hanky Code? It emerged in the late 1960s in New York and was soon exported to the UK.

Some homosexual men put a handkerchief in the back pocket of their pants to inform other gay men of their sexual preferences while the message went unnoticed by the rest of the people. So, it was like Grinder, but analogue. 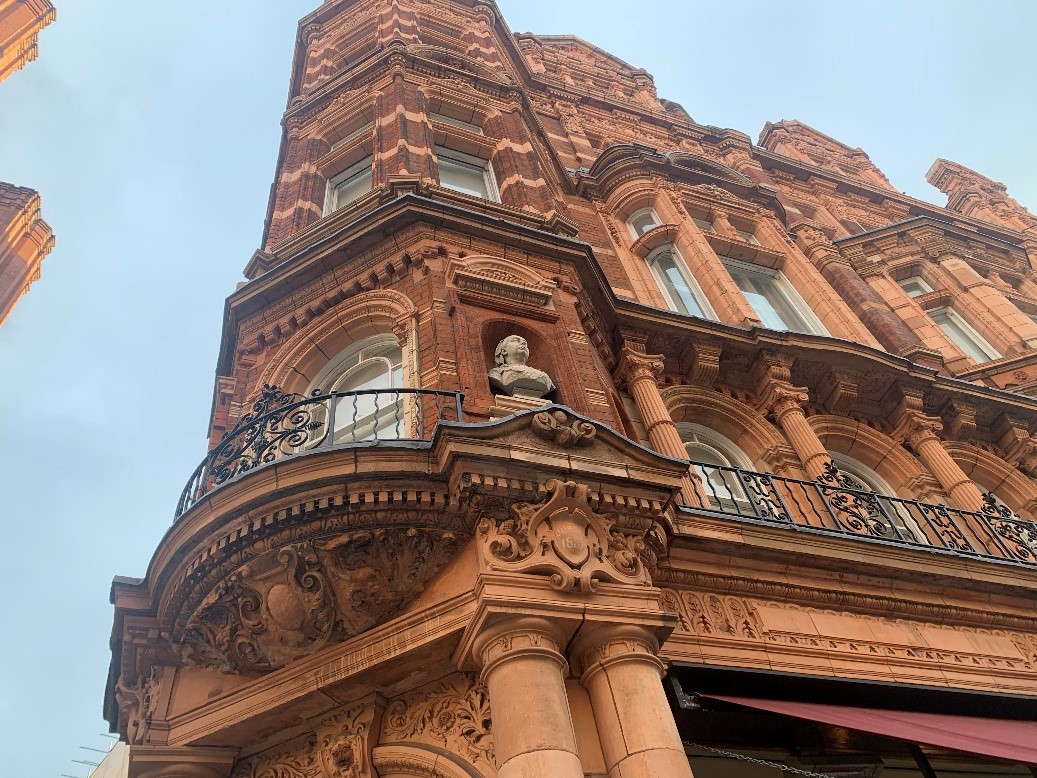 Mount Street is one of Mayfair’s original shopping streets. Looking at its inspiring mix of luxury fashion destinations, it is hard to imagine it started out as a shortcut for people in Central London to come and watch the public executions in the Tyburn gallows.

Towards the end of the 19th century, Hugh Grosvenor, the first Duke of Westminster, demolished and rebuilt its houses, leaving behind this eye-candy legacy of brick, terracotta, and intricate Queen-Anne architectural details.

Hugh Grosvenor was really into terracotta. Luckily, the Grosvenors owned some terracotta factories, now with little to produce after the completion of the Natural History Museum and the Victoria and Albert Museum. Having a surplus, it was used to build Mount Street.

The street also used to house a cemetery for the St. George’s church parish nearby.

Today, the influence of the Grosvenor family is still very much alive. Out of the 47 retail premises on Mount Street, the family controls 32. 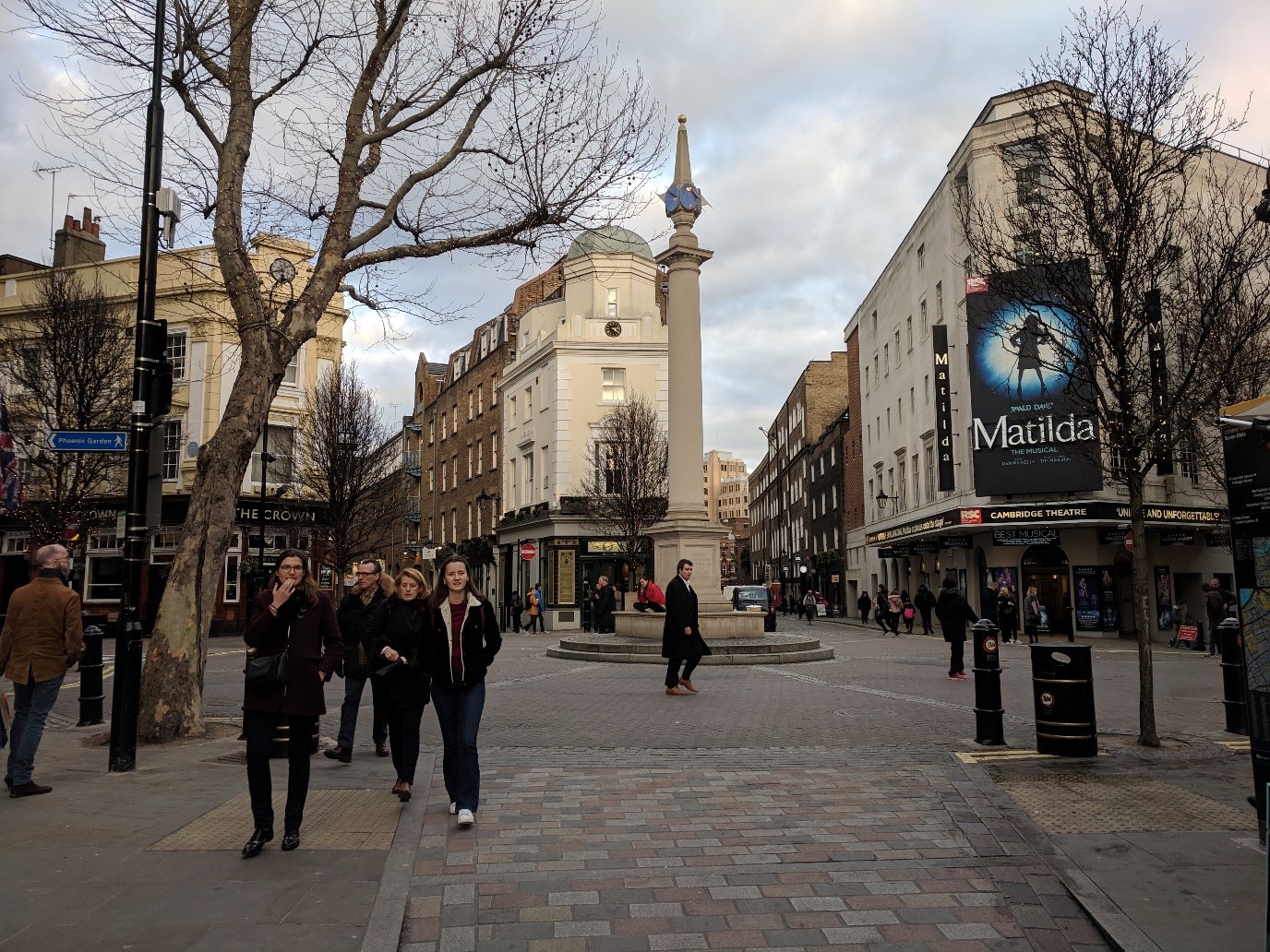 The unique star-shaped layout of the Seven Dials Area in London - seven main streets - remained unaltered since it was first built in the 1690s. The centrepiece of the Area is the Seven Dials Sundial Pillar, a faithful recreation of the lost original, which was pulled down in 1773 by order of the Paving Commissioners to rid the area of ‘undesirables’ who congregated around it.

The original layout was designed by Thomas Neale and included only six roads converging. This was later increased to seven. Therefore, the Sundial column, commissioned before the addition of the seventh converging road, was built with only six faces, with the column itself acting as the gnomon of the seventh dial. Initially popular among wealthy men, the Area slowly became infamous, and by the early 19th century, it was part of the slum of St. Giles to the north, and home to the destitute, the criminal, and the desperate. 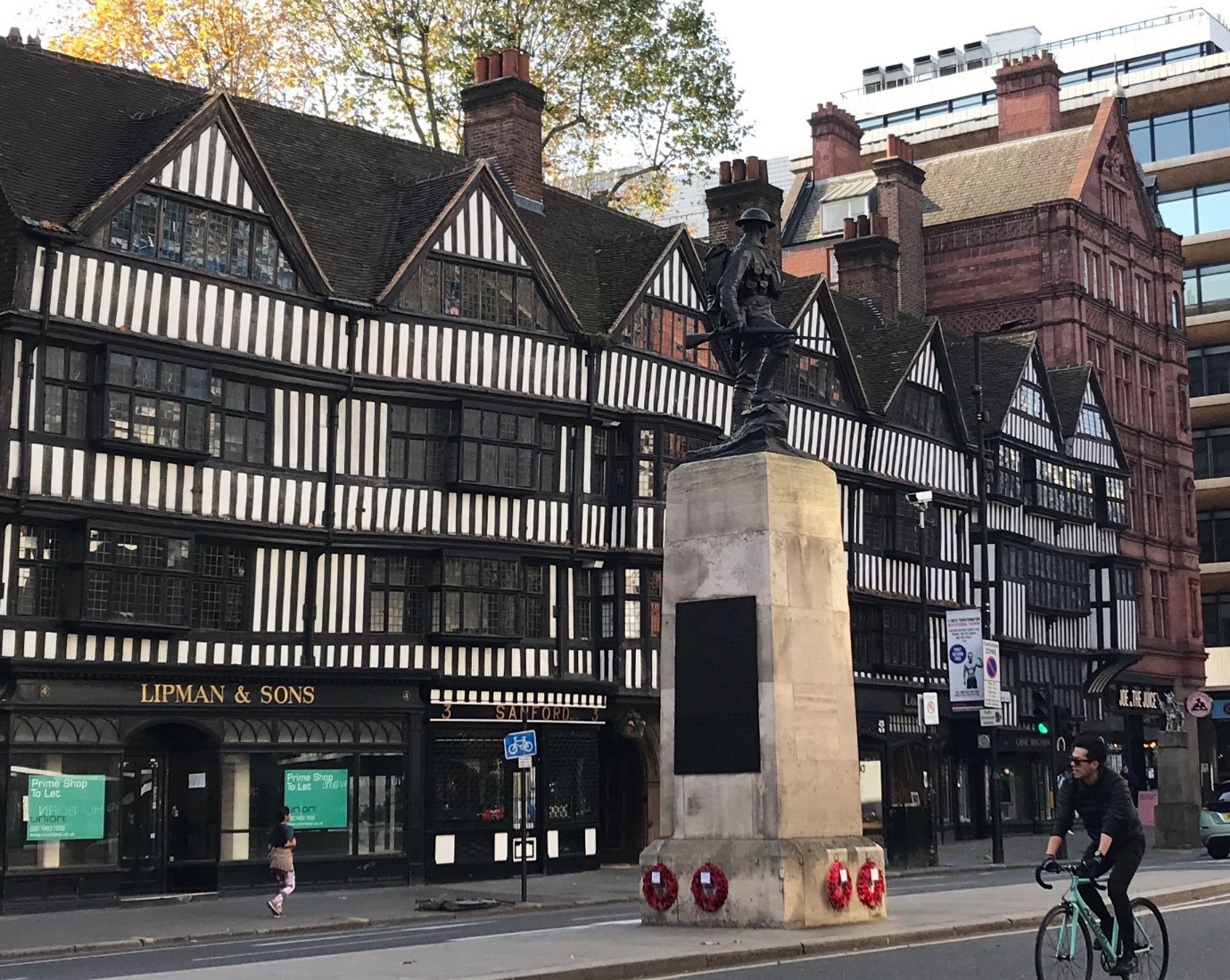 In Medieval times, before Staple Inn housed lawyers, it was used by merchants who traded in goods known as staples. Wool was regarded as the most valuable staple, and King Edward III proclaimed that his Lord Chancellor should sit on a wool bale, to symbolise the importance of the wool trade. In one of English parliament’s quainter customs, the Lord Chancellor, now the Lord Speaker, continues to speak from this large, wool-stuffed cushion covered with red cloth.

In the opening of his novel, Bleak House, Dickens writes that the Lord Chancellor is “sitting in Lincoln’s Inn Hall” while the streets outside are full of fog. The Chancellor represents the legal system of which Dickens was highly critical. For Dickens, fog becomes a potent metaphor for this unjust and obscure legal system which stifled the city just like the real pea-souper fogs of his day. 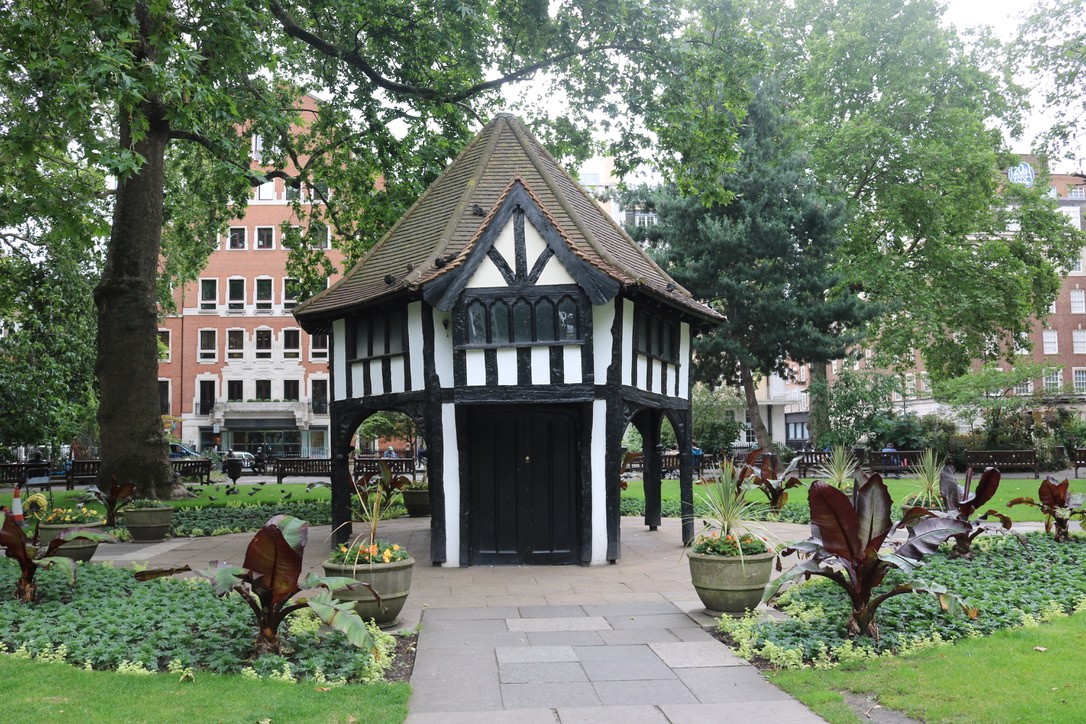 This is one of the free places to go to in London that you musn’t miss!

Kirsty MacColl was a British singer and songwriter who recorded a number of pop hits in the 1980s and 1990s. She is best remembered for singing “Fairytale of New York” with the Pogues.

Her father Ewan, also a folk musician, owned the Singer Club in Soho Square. He was the one who wrote the Roberta Flack classic “The first time I ever saw your face”.

Kirsty MacColl’s life ended tragically at only 41 years old, on a Mexico holiday, in 2000. She and her sons, 13 and 15 years old at the time, were diving at the Chankanaab reef when she saw a powerboat entering the restricted area at high speed.

She saw that her son Jamie was in the boat’s path and she pushed him out of the way, at the cost of her own life. 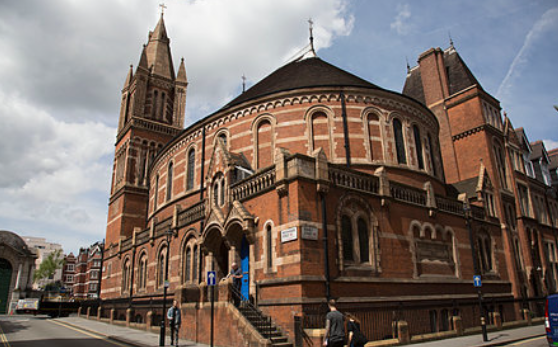 Would you like to know one of the scariest free places to go to in London? When you get to the Church of the Holy Family in Exile, remember the grim story of that exile, a story that is still as haunting as ever.beautiful

In the New Testament, it is recounted how King Herod found out that a new king will be born and, terrified to lose his position, ordered the killing of all male infants, two years old or younger. Although baby Jesus was saved by his parents flying to Egypt, all the other baby boys were not. The event is called the Massacre of the Innocents, and the babies are considered the first Christian martyrs.

Surrounded by office buildings, we find St Dunstan-in-the-East, a ruined church that was damaged during WWII. This is one of the most unexpected quiet places in London! It hides a surprising, beautiful garden that normally compares to an "Urban Oasis", where city workers come to relax during their lunch break.

When London was hit by the plague in 1665, people believed that it was a divine punishment sent by God in response to people's sins, so churches were at the centre of attention. They believed that fasting, prayers and sermons would help to keep it away. They were so desperate that they would try any kind of remedies, but some would only make it worse. A rumour began that syphilis gave immunity against this terrible disease, the idea was that one horrible evil nullified the other, and people tried hard to catch it!

If you like the sound of these beautiful places to visit in London, there are many more hidden gems like these in our London walking tours, which will allow you to wonder round the streets of the city and admire its hidden corners and beautiful buildings, while also finding out fun facts!