14 Castles in Germany You Need to Visit

From military fortresses to royal residences, Germany has the most castles of any country in the world. Though no one is sure of the exact number, estimates put it at around 25,000!

These incredible structures have stood the test of time to become some of the most-visited attractions in Germany, inspiring everything from classic fairy tales to Mary Shelley’s Frankenstein.

With so many on offer, it’s impossible to choose the best castles to visit in Germany. Instead, we’ve compiled a list of our personal favourites.

Discover more places to visit in Germany on one of our many walking tours!

At 1000 years old, Nuremberg Castle is one of the most important surviving medieval castles in all of Europe. In its time, it has been the home of German kings, emperors, and even kings of the old Holy Roman Empire.

Situated in Nuremberg, the castle dominates the area with its towering walls and spires, making the city one of the most fortified in Germany. It’s a favourite of tourists and locals alike, with stories to be uncovered everywhere you go. 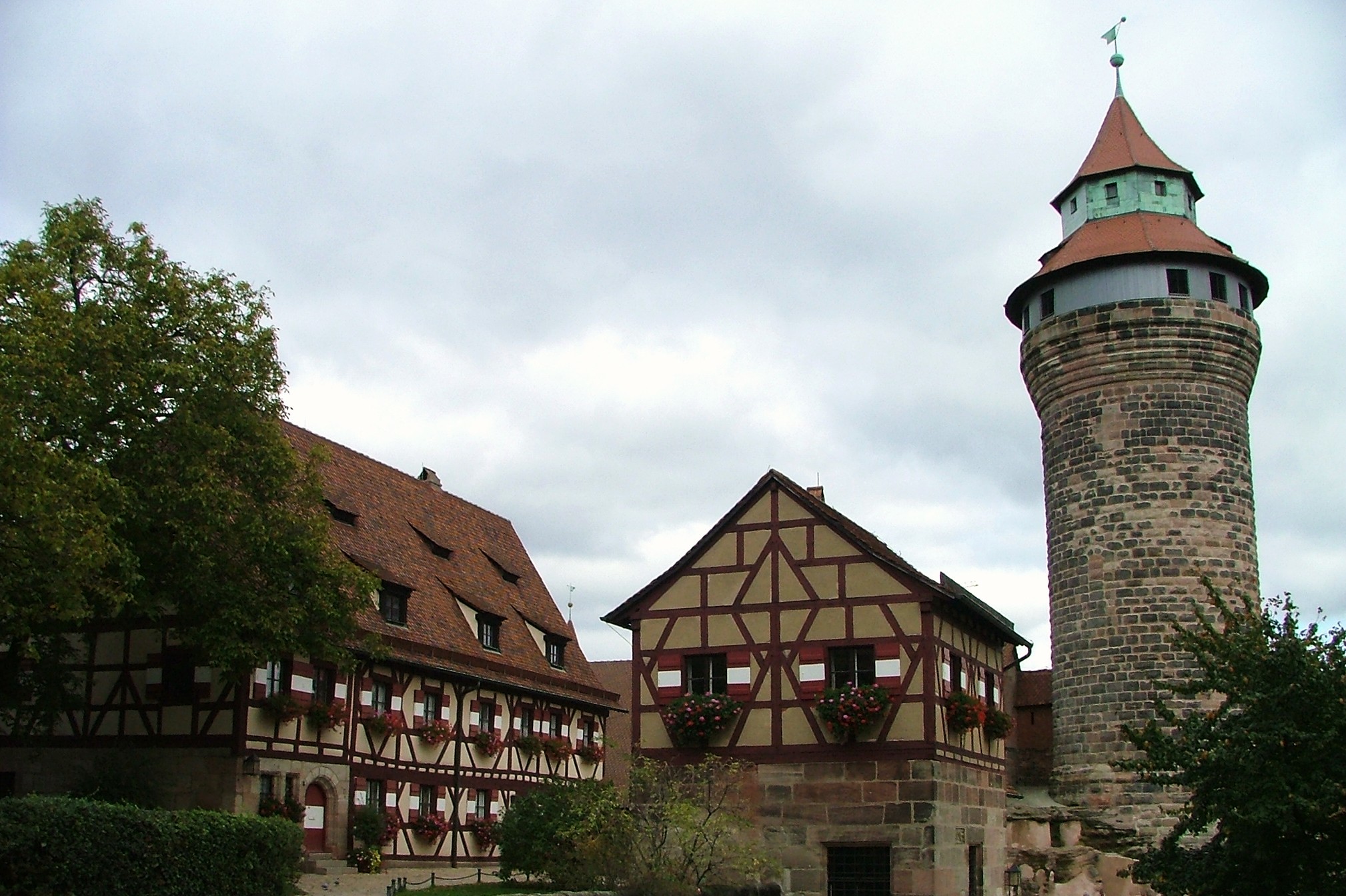 One of the more modern-looking on our list, this castle is located in the heart of Dresden, Germany. And at 400 years old, it’s one of the oldest buildings in the area.

Over the years, it has been home to many ancient kings and queens of Saxony. These days, it largely functions as an art museum, housing everything from Rembrandt to Picasso. For any art fans, Dresden Castle isn’t one to miss. 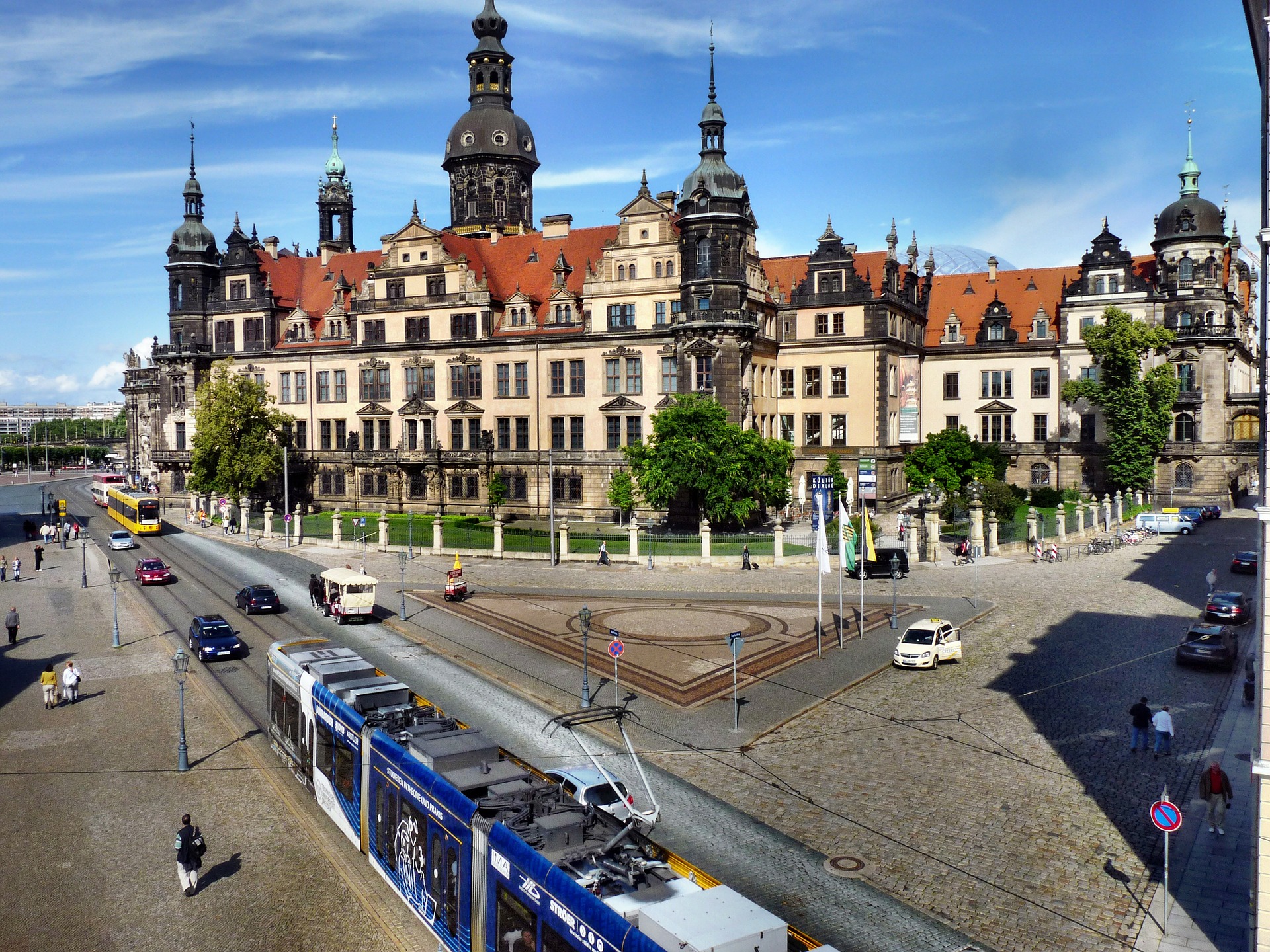 Sticking out from the forest landscape is the sandstone castle of Heidelberg. Overlooking the town below, this imposing structure is one of the best examples of German Renaissance architecture still standing.

Built in the late 1100s, the castle has seen its fair share of destruction, from lightning fires to sieges by the French during the Nine Years’ War. Much of the castle grounds are now left in ruin, but it is far from abandoned. Filled with festivals and concerts year-round, Heidelberg Castle is a gem in the German countryside. 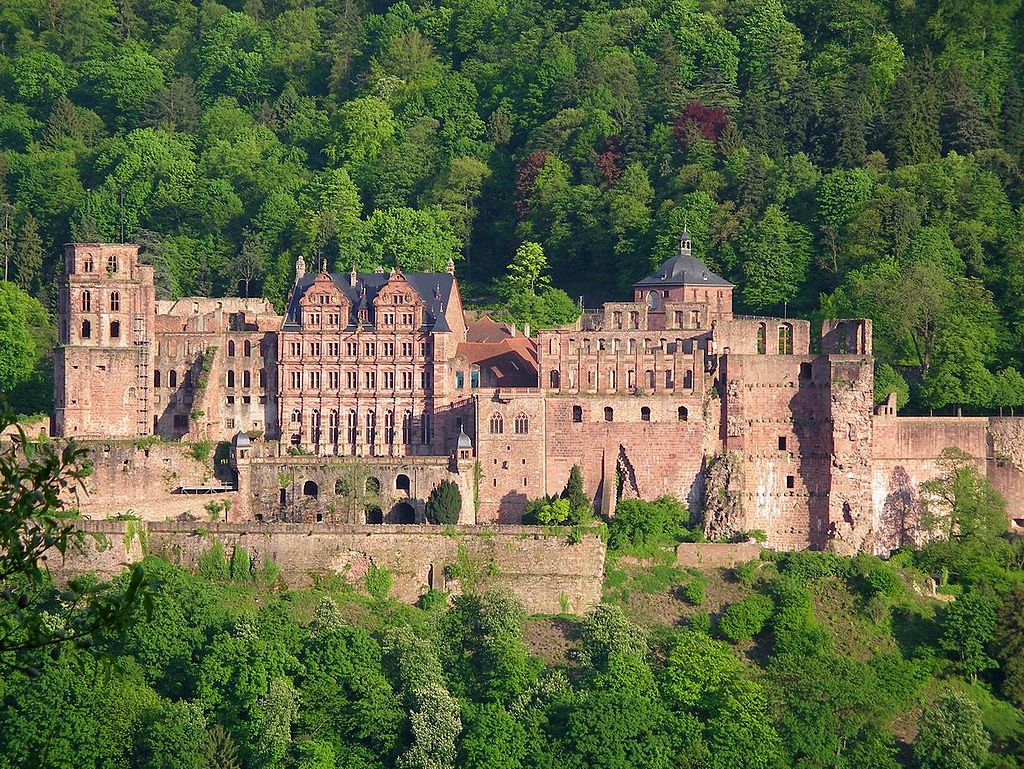 Like something out of a medieval fantasy, Neuschwanstein Castle is a fairy tale come to life. This architectural masterpiece was built on a cliff and boasts unimpeded views of the surrounding valleys and the Bavarian Alps.

King Ludwig II of Bavaria commissioned the castle in the 1800s, acting as his personal retreat. In the years since the king’s death, the castle has only grown in popularity. And with panoramic views perfect for sightseeing, it’s easy to see what makes this one of the most visited castles in the world. 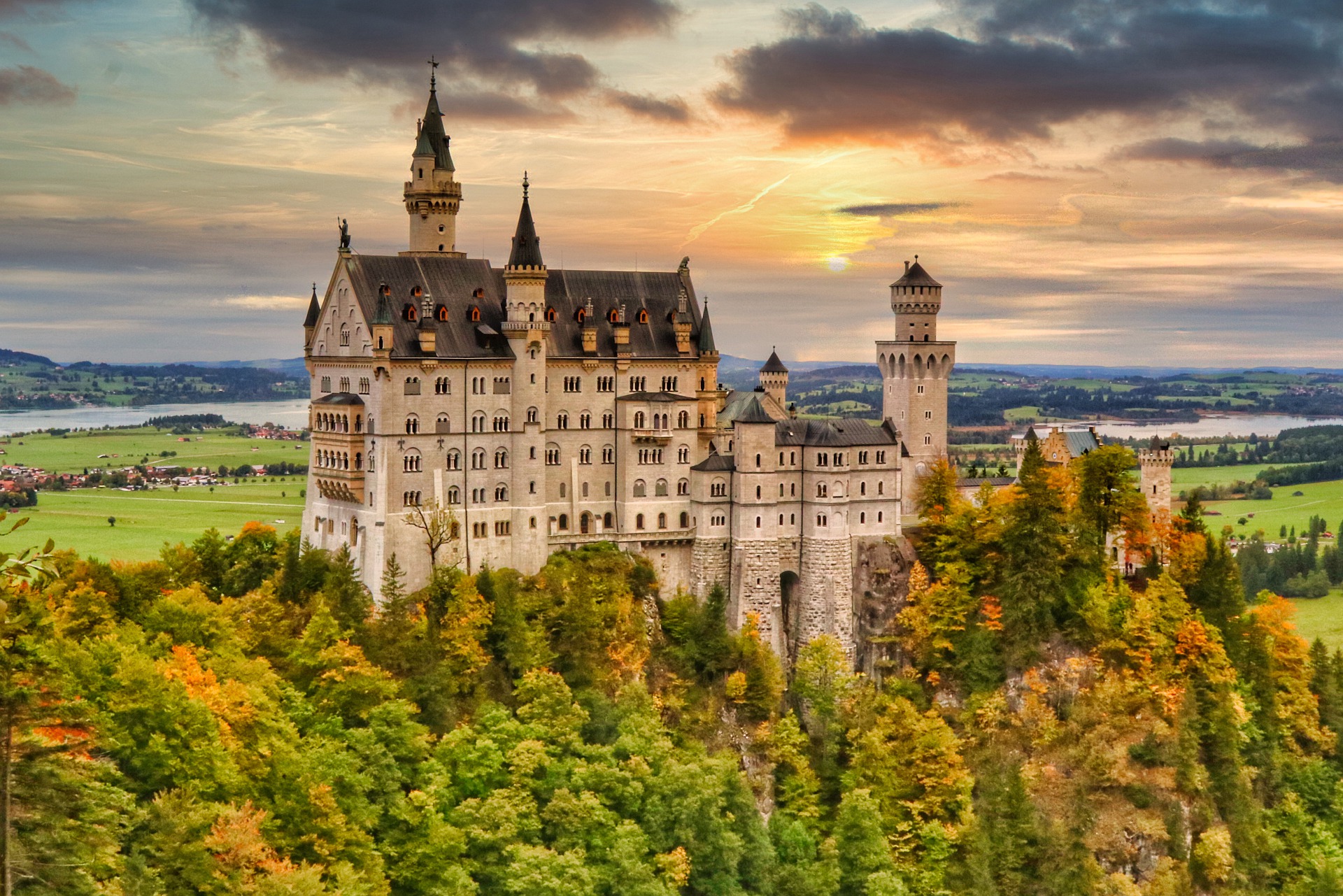 Nestled in the hilltops above the Moselle River is the lonely Eltz Castle. Known for its fairy tale aesthetic, with its tall stone walls and narrow bridge, it’s an unforgettable sight on the German landscape.

Despite being many hundreds of years old, the castle hasn’t changed much since the 1600s. It has been faithfully maintained by the original family, making it one of the best-kept medieval castles in Germany. 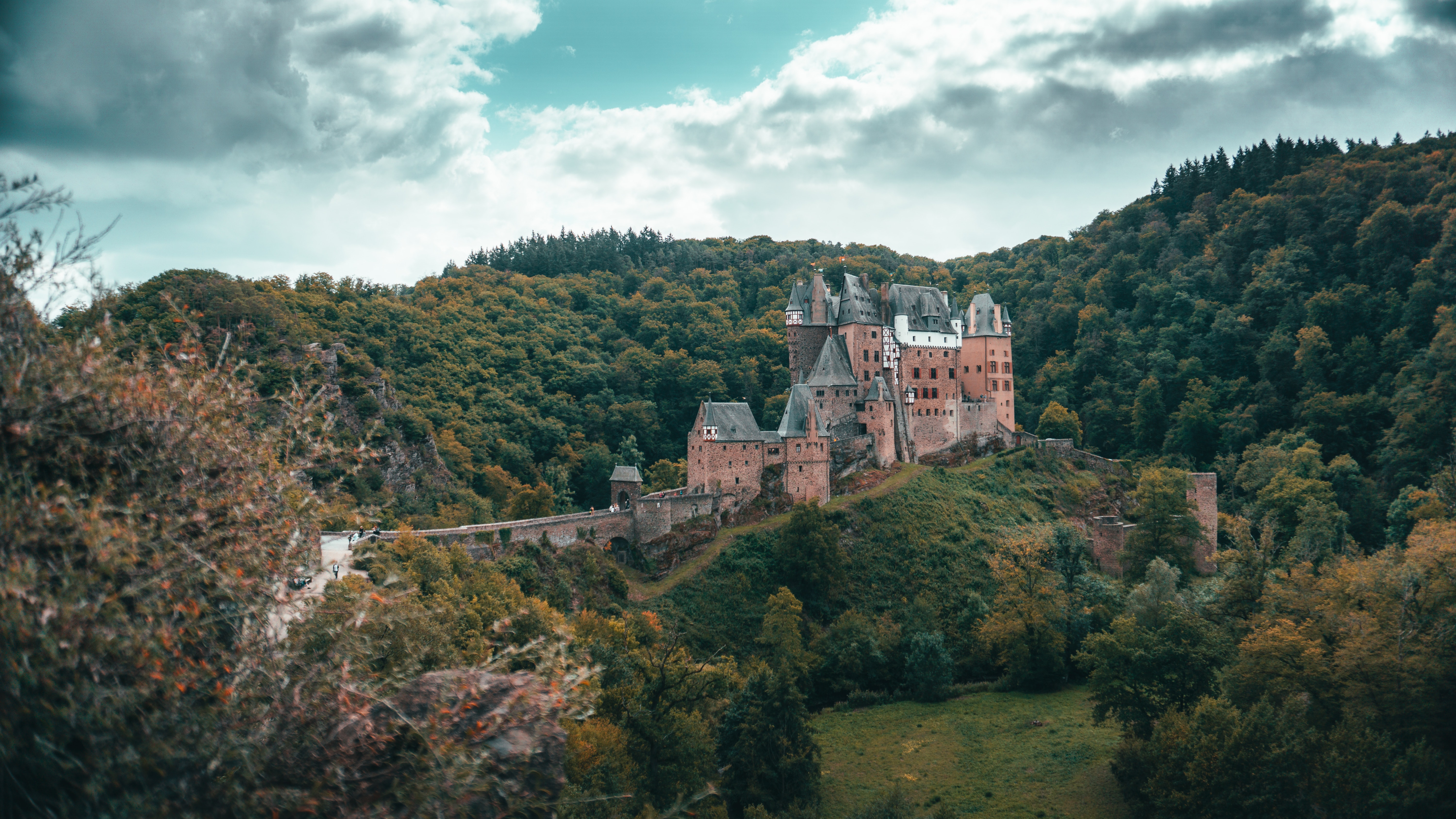 Perched on a small rocky outcrop that’s only accessible by a narrow wooden bridge, Lichtenstein Castle is undoubtedly one of the more unique attractions on our list. But don’t let the stone façade fool you. This privately-owned castle only dates back to the 1800s and was constructed to look medieval.

The castle was commissioned by Duke Wilhelm of Urach, inspired by his love of medieval history. From its forest backdrop to the many turrets, this Gothic-revival castle is one of the most picturesque castles in Germany, and not one to miss. 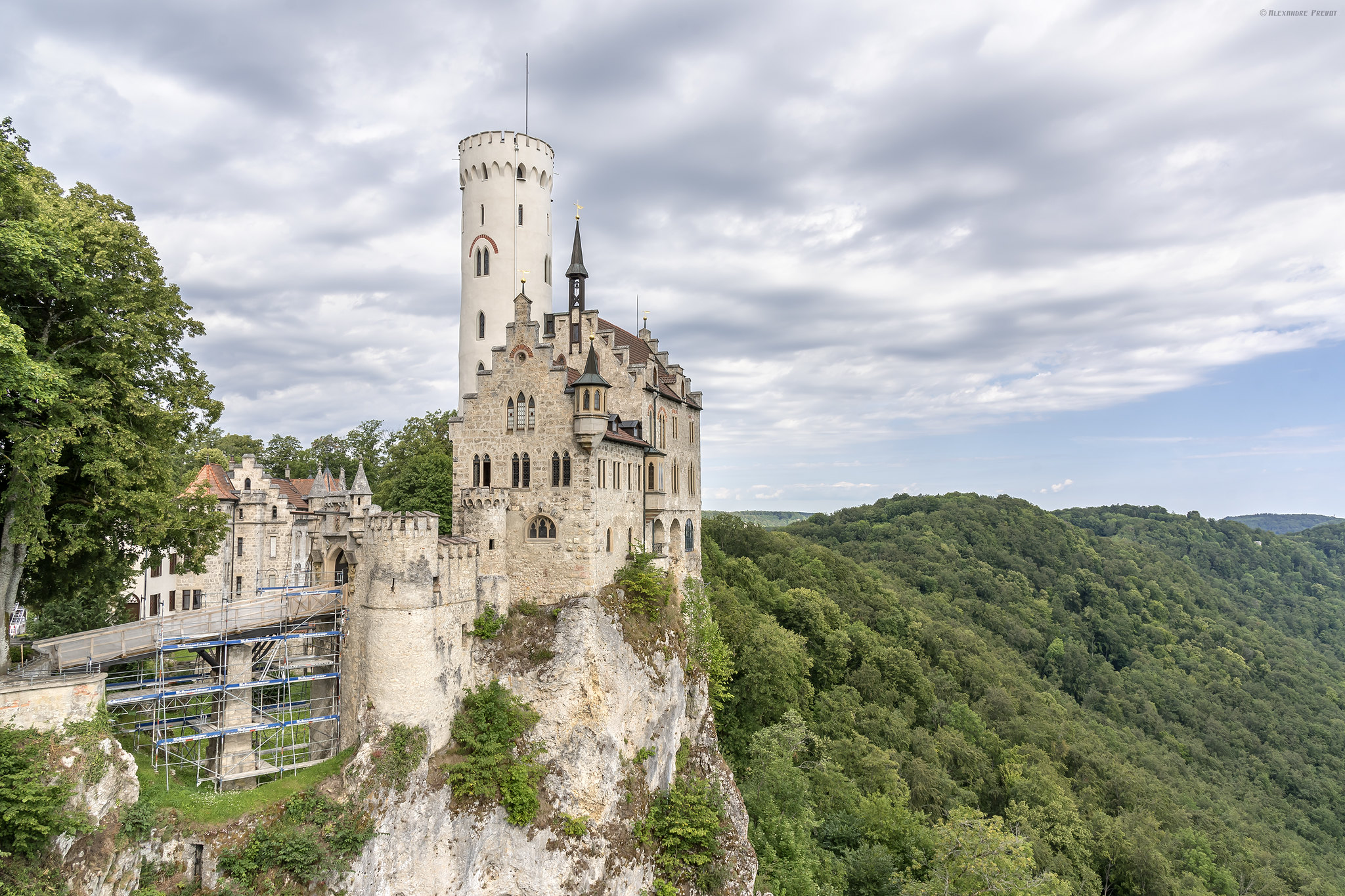 A castle in the clouds! If you’re looking for great sightseeing spots in Germany, Hohenzollern Castle is a hard one to beat. Situated at the top of a mountain, the site offers sweeping views of the surrounding hills. On a clear day, you can see up to 100 km away!

The castle, which is still owned and maintained by the Hohenzollern family, has hundreds of historical artefacts on display and offers guided tours of the property. 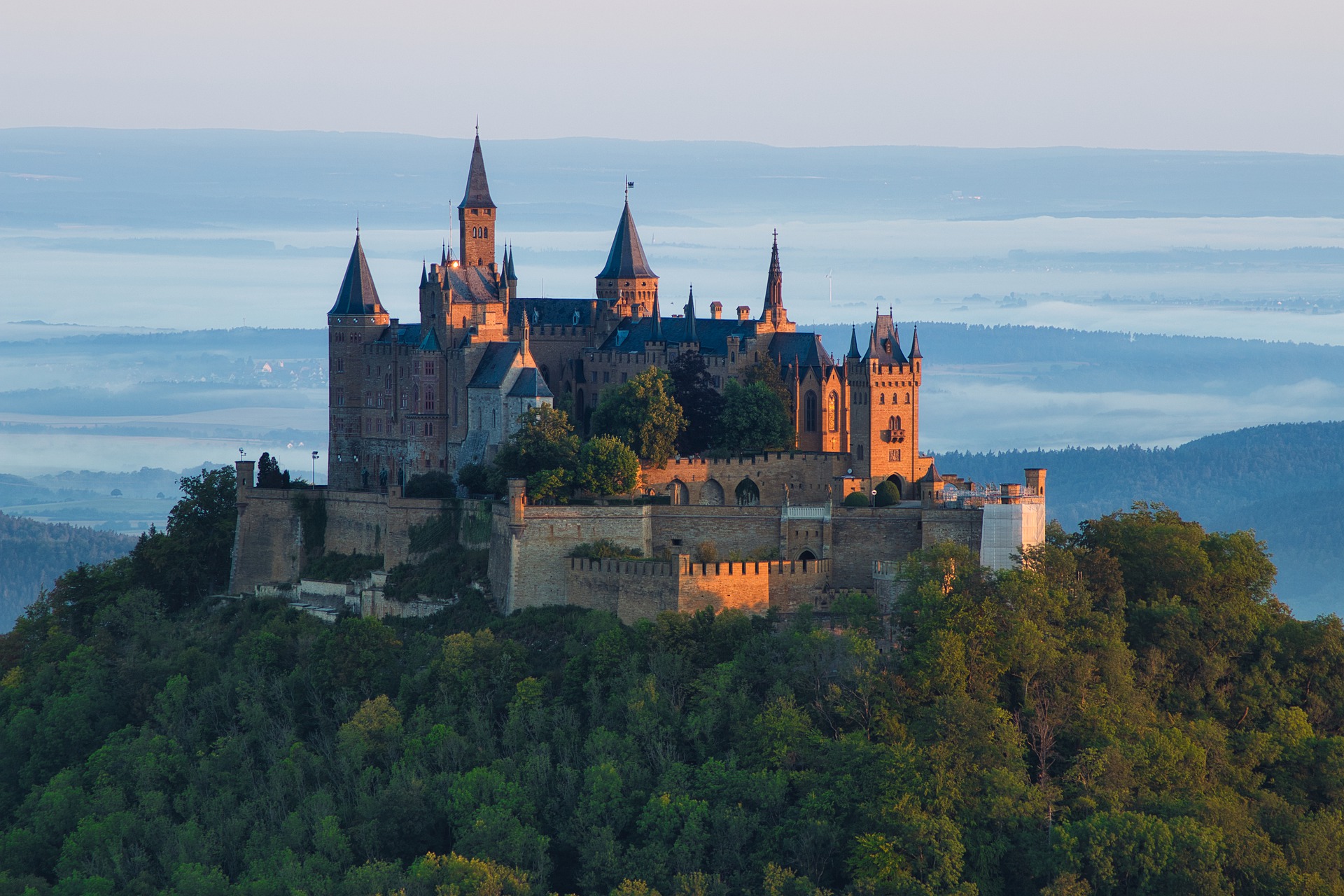 The original castle at this location was built back in the 12th century. But like most others in Germany, Cochem Castle didn’t survive its long years unscathed. After the original was destroyed by King Louis XIV of France, it lay in ruins until being restored in the 19th century.

Cochem Castle has seen several owners since then, even being a Nazi-led law school during WWII. It was eventually bought by the nearby city of Cochem and turned into a popular tourist attraction. 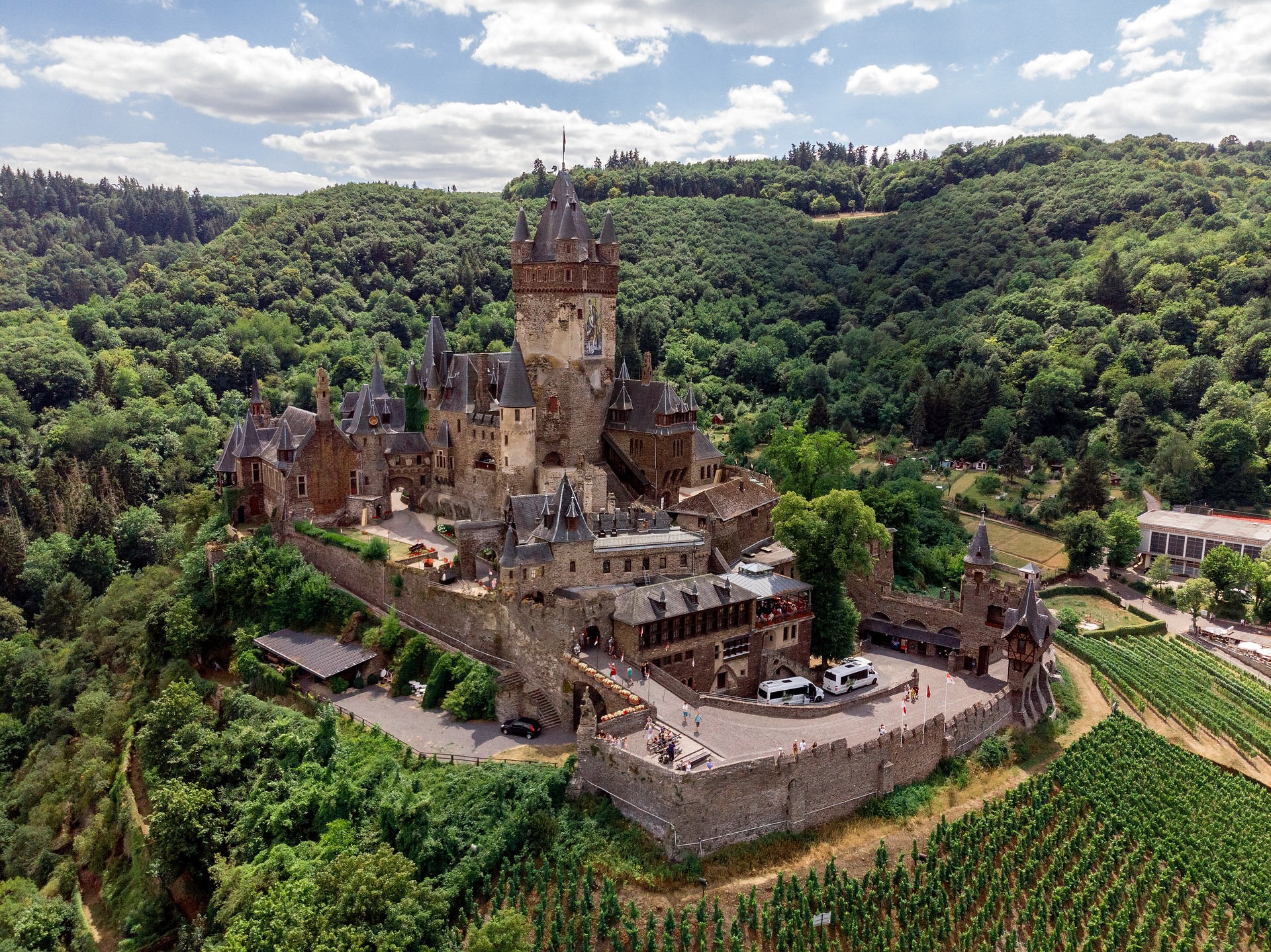 Not all castles are imposing structures perched on a mountainside. Some are more modest, like the beautiful Mespelbrunn Castle near the city of Frankfurt. Amongst other things, its location over a river gives it a certain charm.

Despite being spared by the Thirty Years’ War that destroyed many of Germany’s castles, not much of the original 15th-century building remains. During the rebuild, it was remodelled to look more like a manor house than a defensive castle, hence its quaint appearance. This unique look is perhaps what makes it such a popular attraction for tourists. 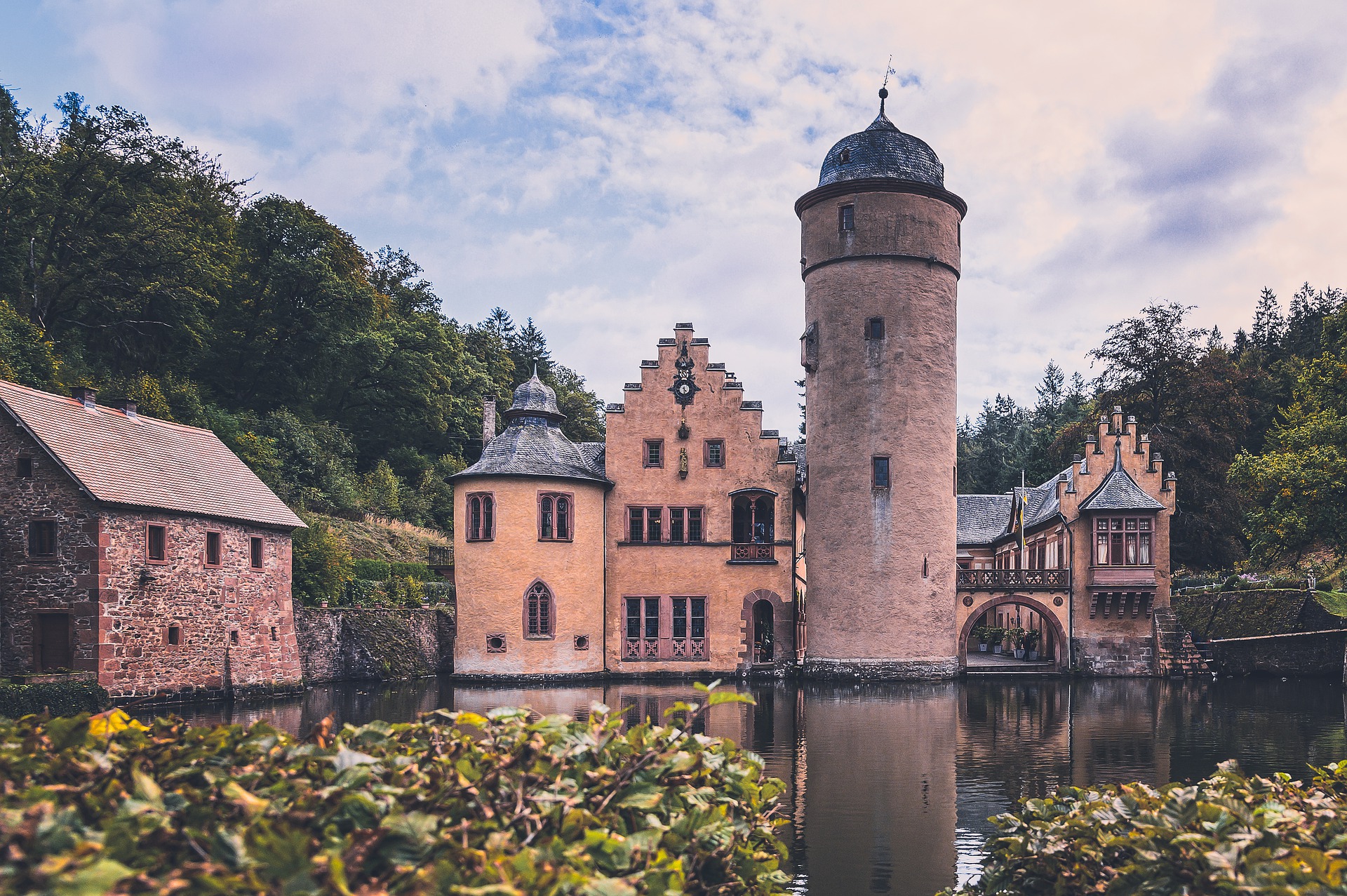 From the modest to the grand, Schwerin Castle is about as impressive as they come. Located in the northern region of Germany, the castle is situated in a slightly unconventional spot – in the middle of a lake.

With water on all sides and just two narrow bridges, this beautiful castle seems like it was plucked from the pages of a Brothers Grimm tale. And the inside is no less impressive, boasting an astonishing 653 rooms! 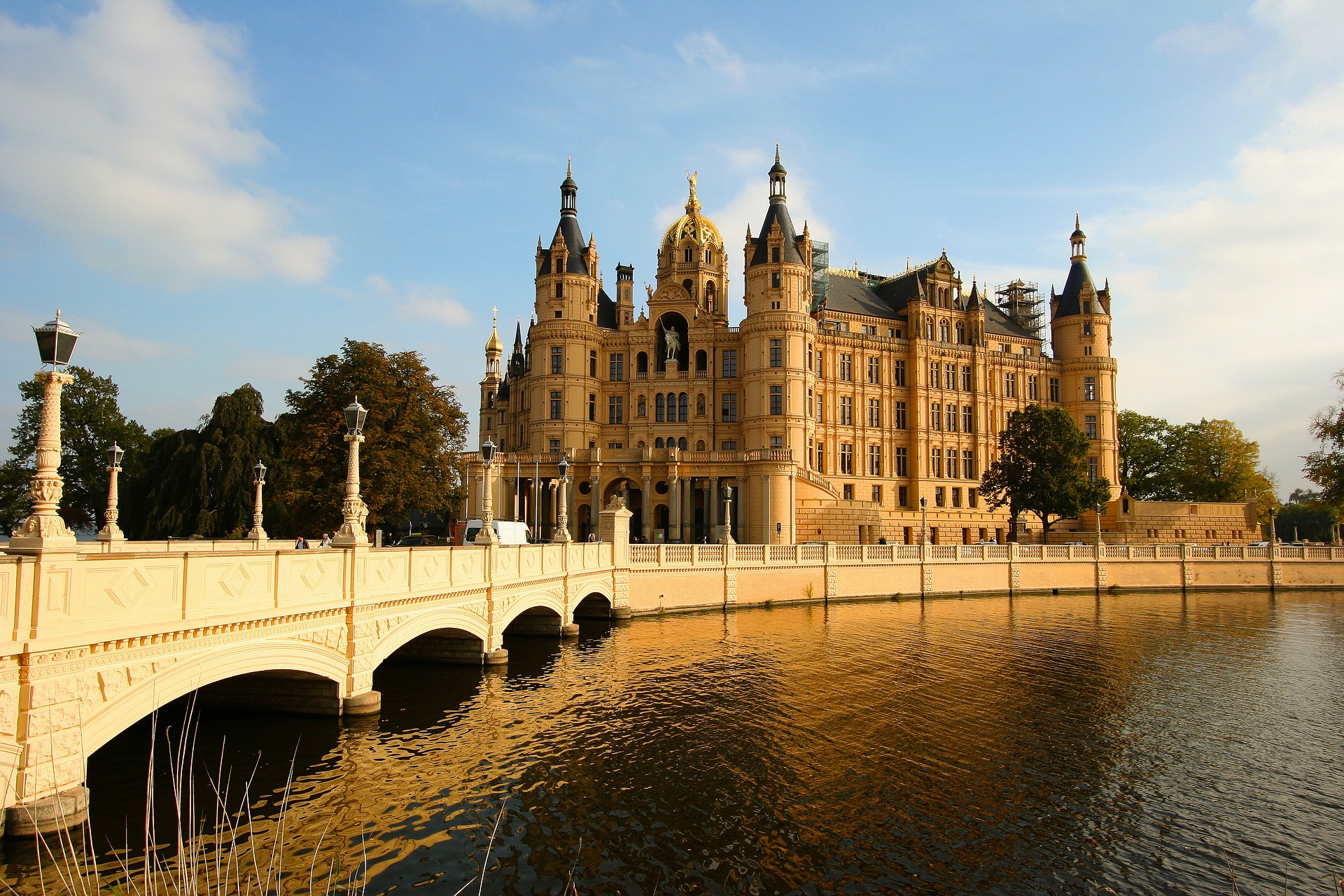 This castle, built atop a rocky cliff overlooking the town of Sigmaringen, has been the property of the Prussian royal family since the Middle Ages. And they still call it home to this day!

Located just south of Stuttgart, Sigmaringen Castle is one of the most beautiful castles in Germany. Plus, it has something unique to offer. Alongside Buckingham Palace in London, it is one of the few active royal residences that offers walking tours to the public. 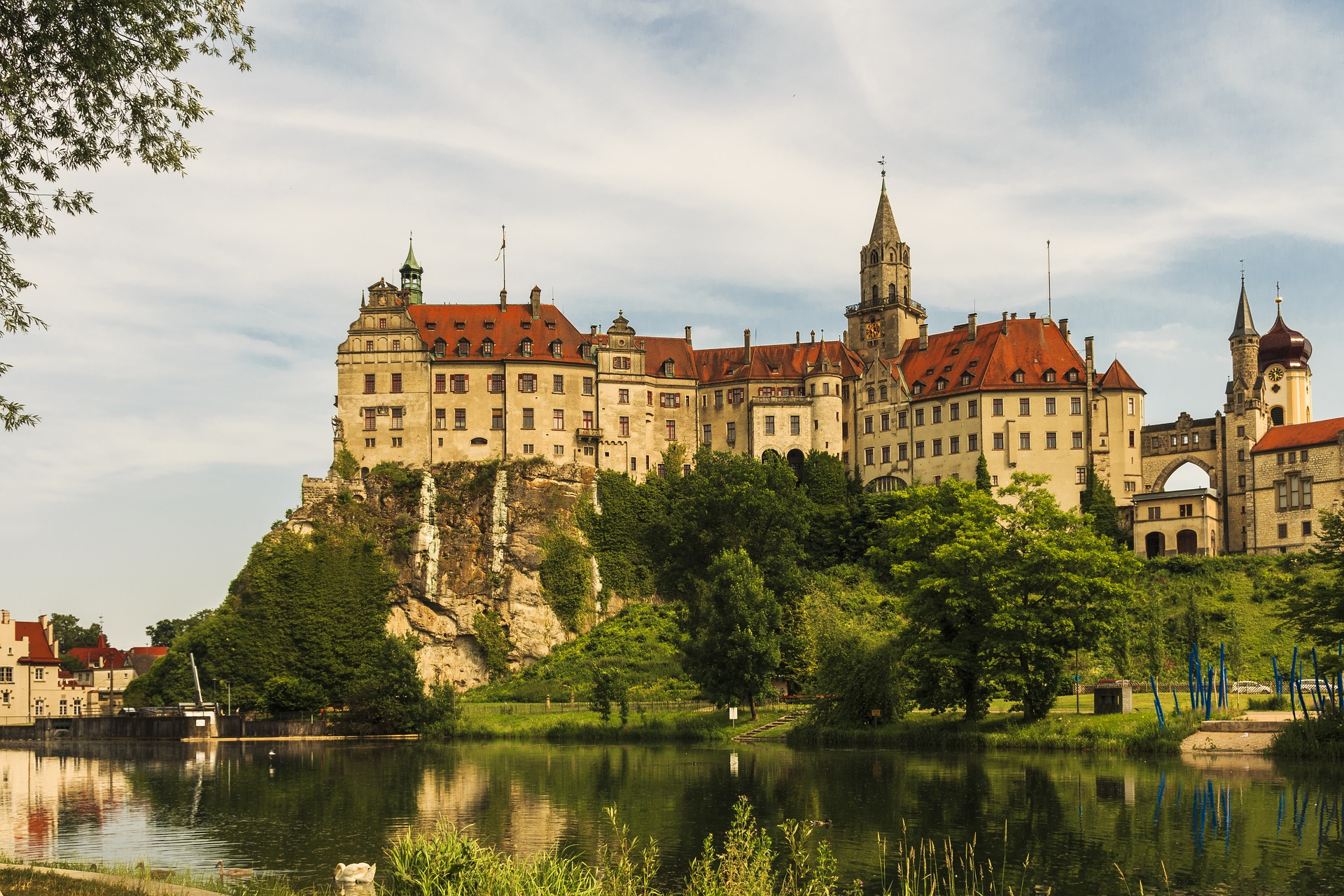 Situated on the side of a mountain, this castle offers fantastic views of the beautiful Rhineland-Palatinate region of Germany – perfect for anyone looking to do a bit of sightseeing. Whilst its location overlooking the River Rhine once gave it strategic advantage as a military stronghold, it is now known for its postcard-perfect beauty.

Despite being rebuilt in the 19th century, the castle offers one of the most authentic looks at medieval architecture, complete with a drawbridge and even a portcullis.

If you don’t mind the hour drive outside of Frankfurt, you won’t miss a visit to the beautiful Rheinstein Castle – one of the most beautiful castles in Germany. 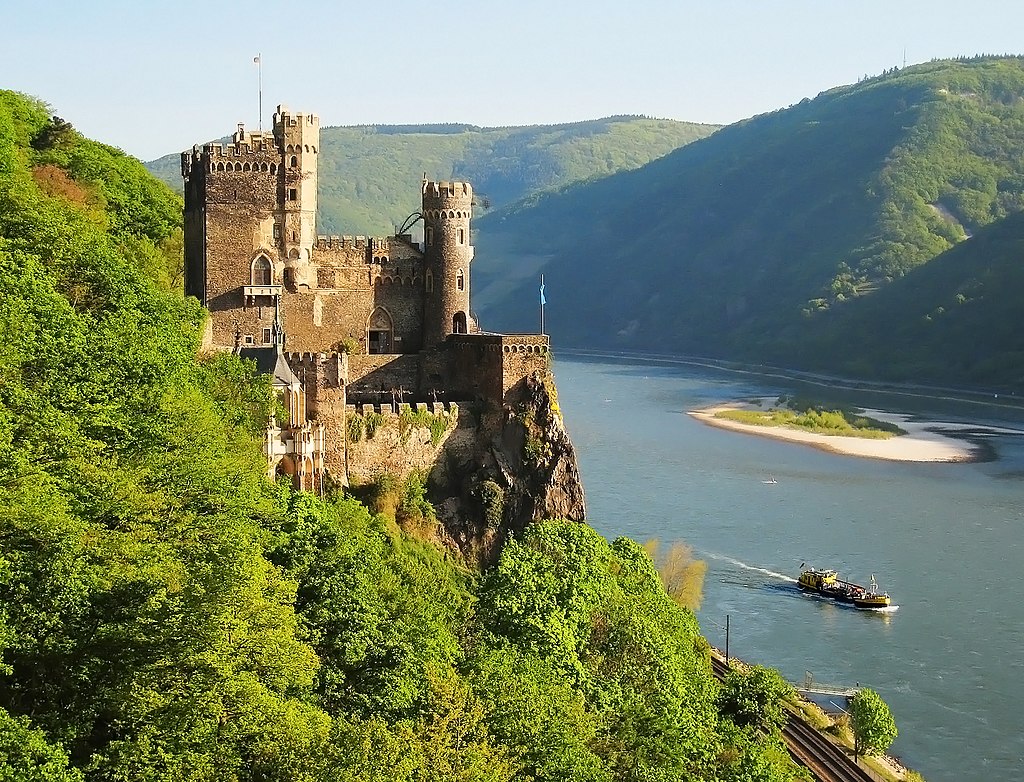 No, we’re not making this one up. As the name suggests, this 13th-century castle served as inspiration for Mary Shelley’s book Frankenstein. The titular character, Dr Frankenstein, was loosely based off the life of Johann Conrad Dippel, an alchemist who set up a laboratory inside the castle. It was from here that he bottled and sold his ‘elixir of life’ made from animal oils.

Legend goes that Mary Shelley first heard the tale of Dippel whilst on a cruise up the Rhine River in 1818. The castle itself has an eerie feel to it, so it’s easy to see where she got the inspiration for her creepy gothic novel. 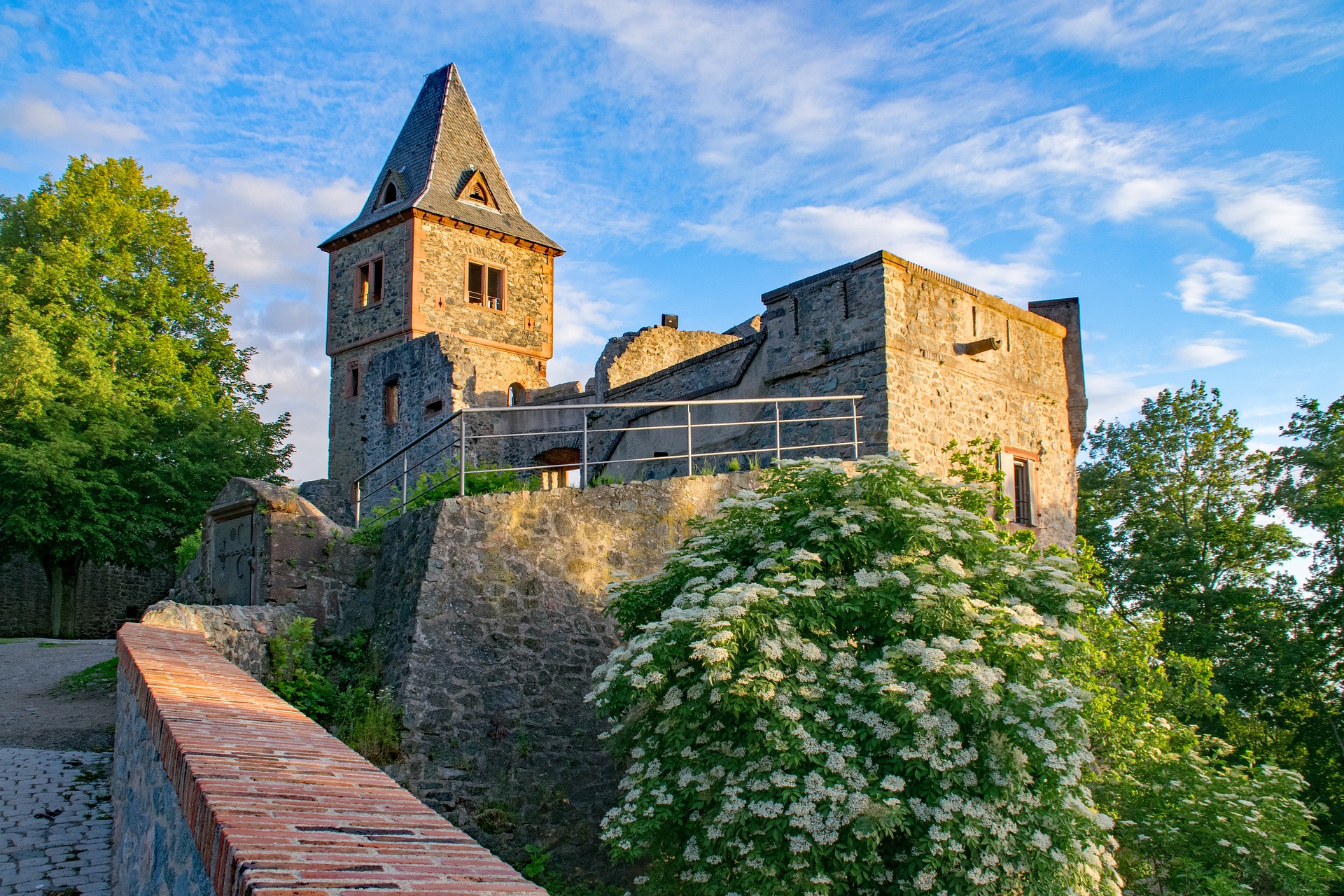 Sitting beneath the shadow of Neuschwanstein Castle is yet another castle that juts out from the forest landscape. Though a little smaller than its neighbour, Hohenschwangau Castle is no less impressive with its unusual bright orange façade.

Though the foundations date back to the 1100s, the castle itself fell into ruin many times over the years. It was eventually rebuilt in 1832 by the Bavarian Crown Prince Maximilian, who introduced a neo-Gothic style. 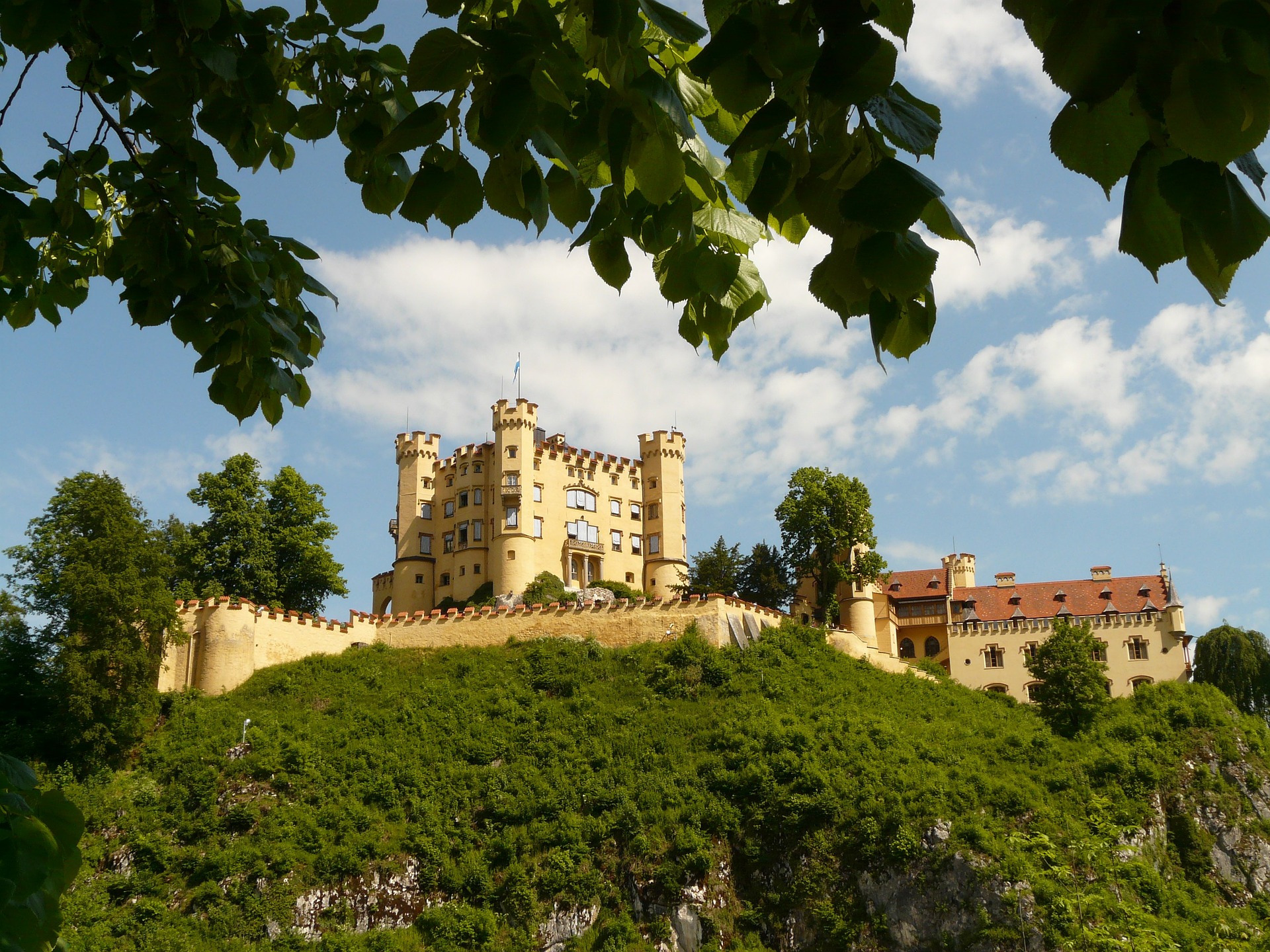 Planning a trip any time soon? Discover the best way to explore a city on one of our city walking tours. Wander the streets at your own pace, discover local attractions and uncover hidden gems.